The Truth About Dice Control

The sad truth is, in today’s casinos there is no such thing as Dice Control. Dice Control, is, in fact, a misnomer. It’s a catch-phrase that has fallen into general use when describing what “controlled” shooters attempt to do – which is to influence the outcome of the roll. Since there’s no such thing as Dice Control in todays casino that means there’s no such thing as a “Controlled Toss.” For that reason, I like to refer to what others call a “controlled roll” as a “percentage toss.” We don’t control every roll, but we do influence the outcome of some of our throws – and that influence can give us enough of an edge over the house’s percentage to make it pay for us.

Every percentage shooter’s toss is different. Why? Because everyone’s hands and fingers are shaped differently. Some of us are tall and thin. Others are shorter and not so thin. A comfortable stance or grip for one person is often impossible for another. On top of that, different “dice control” camps teach different toss techniques. Some teach “off axis” tosses while others teach “on axis” tosses. Some teach tossing at a 45 degree angle. Others suggest a 30 – 40 degree angle is better. And at the end of the day, we all become creatures of habit as far as out tosses go – good habits and bad habits – for better or worse.

With that said, there are still some elements that are common to the best tosses around. Assuming the shooter has an excellent grip on the dice, he will begin and end his toss with the dice square to the deck of the table. In addition, the dice will also be square with the back wall and will travel in a straight line trajectory down table. After landing, the dice will tumble to the flat portion of back wall and strike the base of the wall, where there are no rubber pyramids.

If tossed back-handed, the dice will fly in a parabolic arc to the landing zone, with just enough backspin to keep the dice on axis and rotating in tandem. The dice will strike the shooter’s preferred landing zone – typically anywhere from six to twelve inches from the back wall – bounce once or tumble gently to the base of the back wall, then roll back no more than a couple of inches before dying no more than a few nches apart. The dice should not strike in the turn or the hook, the curved portions of the back wall, although there are some decent shooters out there who use that technique. Keep everything square instead. 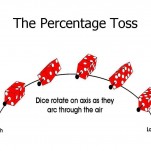 If tossed underhanded the dice will fly in a relatively straight line to the landing zone, which will likely be twelve to eighteen inches from the back wall. They will be tossed with just enough forward spin to carry them to the back wall, where they will strike the base of the rail rubber with minimal roll-back. Back in the good old days of street craps or army barracks games this was known as the blanket roll and it can still be very effective today.

The Axis Power Craps Percentage Toss starts with the dice gripped and in contact with the table. The shooter focuses on his landing zone, takes a breath, lets it out, then executes the toss by bringing the dice up at a 35 to 45 degree angle, releasing them so that they fly no higher than six to twelve inches higher than the rail, landing about six inches from the back wall. The dice should take one bounce, then strike the back wall near the base and bounce back no more than a couple of inches inches. Do not expect to achieve those kind of results when first starting to practice. And remember, while it is possible to learn dice influencing on your own – there is no substitution for hands on teaching from a professional dice influence instructor.

Does the ability to execute a percentage toss mean you’ll automatically be a winner at craps? Absolutely not. No matter how good of a shooter you are, if you are undisciplined and lack basic betting, money management, and betting skills then odds are you’re still doomed to lose. So what makes a successful player?

1. Knowledge of the game.
2. Sufficient bankroll.
3. A conservative betting approach.
4. Good money management skills.
5. Discipline.
6. The ability to influence the outcome of the roll.
7. A winning attitude.

This is the breakthrough video that sent the competition back to the drawing board. This was first professionally produced DVD demonstrating the mechanics of a controlled dice shot. Here are a few of our customer comments on the DVD:

"The other guys promised me gold - Heavy delivered."

"Heavy has thrown another winner!"

"Fixed my toss and made me a winner."
This DVD includes the portion of the seminar that deals specifically with the mechanics of the grip and toss, along with roughly twenty minutes of tossing and coaching live at the craps table. You'll see Heavy and his students setting and throwing the dice with the camera running real time to show the results.

Altogether you'll receive almost three hours of player education featuring the best dice sets, grips, tosses, and more. In addition, we cover betting strategies, money management, discipline, focus, the mental edge, and playing the comp game to win. You'll also receive the e-versions of the seminar workbook, manuals from our other seminars, handouts and strategy cards as an added bonus. Order now and we'll also include a copy of Heavy's"Crapshooter's Buffet" audio CD - recorded live at the Las Vegas Craps Festival in 2001.

The Axis Power Craps Clinic on DVD - it's the next best thing to being there!

Buy Heavy's Axis Power Craps Manual! Axis Power Craps details five skill sets almost anyone can learn. Master these and you too can become a precision craps shooter. Order now and find out how!

Axis Power Craps includes betting strategies for every dice pre-set arrangement. Precision dice shooting works for both right-way and wrong-way play. Your package features an instructional 100 page workbook with dozens of photographs of dice pre-sets and grips. Each book comes with two shirt-pocket precision dice shooting strategy cards, as well as practice forms you can duplicate and use to record your rolls. Axis Power Craps is just $19.95 in e-book format. You will receive the book via e-mail within 24 hours of making payment. The dice setting strategy cards will be sent via 1st class mail, so be sure to include your mailing address. Order on-line through PayPal at this link: If you prefer to pay by check or money order, send your remittance to:
Steve "Heavy" Haltom P.O. Box 7094 Tyler, Texas 75711
Be sure to include your shipping address and e-mail address for order confirmation.


Looking for private craps lessons to sharpen your skills? Heavy is available for private lessons in his Craps Pit in East Texas, live in Las Vegas, Biloxi or Tunica, or right at home in the comfort of YOUR craps pit. A private lesson makes a great birthday or anniversary present and his highly recommended if you’re ramping up for an upcoming trip to Vegas.

Here’s how private lessons in East Texas shake out:

3 hour Friends, Spouses and Significant Others Private Lesson for Two on Basic to Intermediate Craps and Dice Control - $899

6 hour Friends, Spouses and Significant Others Private Lesson for Two on Basic to Intermediate Craps and Dice Control – includes lunch - $999

Looking for private lessons in Vegas, Biloxi, or Tunica? All classes conducted in a casino dealer school on authentic casino craps tables. You and up to six of your friends can take over the school for the day for the full Axis Power Craps private seminar – including Heavy’s TrendMaster Betting Class as a special bonus! That’s 8 hours of group time with Heavy. Price includes dealer school rental and a pizza lunch delivered to the school. $795 per person with a four player minimum. Add a live casino session with Heavy for just $100 per person more with a four player minimum. A 60 day advanced reservation is required to insure availability of the dealer school.

If you have a private table in your home and would prefer to take a class on it - private lessons are available for you as well. Final cost will depend on your location and travel expenses incurred relative to the class. A private Axis Power Craps class, including Heavy’s TrendMaster Betting Strategy training for you and up to five of your friends will likely run around $795 per person with a four person minimum. Final price will be determined at time of registration.

Please note: Classes are available on weekends only and must be booked a minimum of 30 days in advance. 60 day advance registration required for Las Vegas, Tunica, and Biloxi. Need more details? E-mail Heavy direct at axispowercraps@gmail.com with the Subject line: Private Lessons for an immediate response.

Looking to sharpen your practice skills with regulation casino dice? Look no further. Axis Power Craps is proud to offer these beautiful 3/4 inch flush-spot, razor edge, high polished dice. Created from an exclusive cellulose acetate formula developed to insure clarity, hardness and stability, these dice are milled to 1/10,000th of an inch and certified perfectly balanced. They are the perfect dice to take your practice sessions to the next level. Each five-die stick is serialized and stamped with the Axis Power Craps logo. Designed with precision dice shooter practice in mind, these dice are only sold in two-stick sets containing one stick of red dice and one stick of green dice. Both sticks have matching serial numbers. Your cost? $39.99 plus $3 shipping and handling - just $42.99 total.
To order and pay by mail send your remittance payable to: